Actually, let me revise. It's not gender per se that makes me paranoid - it's homophobia and homophobia's close-yet-evil-cousin, transphobia. There are the obvious reasons why bigotry against queer folks makes my skin crawl - like the fear of verbal and physical violence or the disillusionment that comes from being a citizen of a country that openly refuses to extend to you all of the rights that other citizens enjoy.

And then there are the reasons why homophobia and transphobia cause me such great anxiety that while possibly obvious to other queer folks, may not be obvious to even the most progressive-minded ally. I hate homophobia and transphobia because they limit my ability to give others the benefit of the doubt. Despite my ridiculously optimistic nature, I find myself expecting the worst from people and hoping for the best instead of expecting the best and preparing for the very rare occasions when the worst happens. In my last post, I touched on my love/hate relationship with travel through the rural U.S. This anxiety stretches beyond rest stop bathrooms. Earlier this fall, my partner and I spent a weekend in rural Pennsylvania where I had a mild allergic reaction that turned out to be nothing, but for a few tense moments, we debated whether and where to take me to a hospital and worried what would happen when we got there. It may be that hospitals in rural southern Pennsylvania and the folks who work there are totally open-minded and wonderful and our concerns unfounded. But I was fearful of the experience - not necessarily because I expected the very worst, but because I expected the very awkward and extremely unpleasant. Gender makes me paranoid.

My paranoia extends to the economic realm. I'm currently what I would call "under-employed." I work full-time, but I say I'm under-employed because although I am doing work I enjoy for a worthy movement, I'm not paid near what my work is worth because I am stuck in some kind of intern limbo, or "interngatory," as I like to call it. I digress. The point is, my under-employment spurs me to be in a near-constant state of job application. Over the past fourteen months, I've had a number of interviews after which I've been told that I was very close to being hired (second choice in at least one case), but have been offered no permanent employment. This may be due to no other reason than that the economy sucks and there are literally hundreds of individuals with similar qualifications to mine applying for every job I've sought. Still, I can't shake the feeling that people are put off by my gender ambiguity when I show up for interviews. My partner, Barbara, and I have had a few conversations about this. I hate feeling this way because it makes me bitter and mistrustful of others, and may be totally off-base. But racism and sexism frequently happen in employment application processes because people like to hire folks who are similar to themselves. Why would heterosexism and transphobia be any different from other forms of institutional discrimination in this regard? I imagine that seeing an openly queer, gender non-conforming person show up for an interview makes some people uncomfortable, even if they would never voice that discomfort. I worry that it's easier for prospective employers, who are almost universally cis-gender and largely white and straight, to establish a rapport with cis-gender applicants, even if they can't quite place the reason. I worry that though some employers say that they welcome LGBT applicants, deep down they don't want someone who looks like me representing their organization. Gender makes me paranoid.
Unfortunately, "paranoia" doesn't fully reflect the ugly reality that I'm not actually paranoid. Paranoia implies a tendency towards hyperbole and irrationality on the part of the paranoid. I'm not exaggerating, nor do I think I'm irrational. My fears are based not just on my experiences, but on queer people's collective experiences. Consider the following:
This stuff doesn't make me paranoid. It makes me freaking pissed off.
You can find all of the stats referenced above and more by checking out the National Center for Transgender Equality's 2009 survey here and the Center for American Progress here and here.
Posted by Sumner McRae at 10:18 PM No comments: 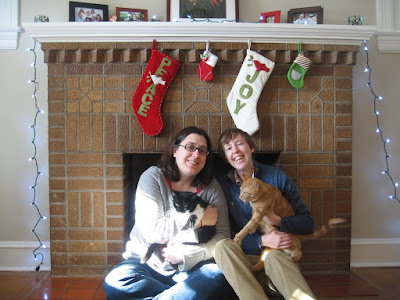 Any gender non-conforming person has experienced instances of what I like to call "mistaken identity." For me, this usually occurs when I get "sirred." Usually being "sirred" is followed by that awkward moment when people hear me speak and then waiver back and forth between wanting to call me ma'am or sir. Their anxiety over the situation is so great that they keep apologizing, fishing for my forgiveness for their astonishing faux pas. At times I find their horror rather amusing. They act as if I should be just as shocked and horrified as they are that they thought I was a sir when in fact I have ma'am parts. They don't seem to consider that perhaps I am dressed the way I am and have my haircut the way it is because I don't mind being a sir sometimes. At a minimum, given the preponderance of mirrors in American society and that it is usually apparent to these folks that I don't suffer from blindness, you'd think the assumption would be that I've seen myself and understand that yeah, I look kind of like a dude, and thus am not shocked when other people think so too. At any rate, as part and parcel of their apology, they press for the correct answer with an increasing urgency ("Is it 'sir' or 'ma'am'? Is it 'sir' or 'ma'am'!?") that is totally unsatisfied by my insistence that either is fine. The frantic questions turn into probes for explanation, either for my appearance or their reaction to it - usually centered around the fact that people seem to think I look young ("Are you in high school?" "No." "College?" "No."). By this time, the conversation has usually gone on too long and I'm getting annoyed. It seems that my outward appearance is at times so confusing to others that they insist on inviting themselves into a conversation with me about my life without realizing that their insistence on continuing the conversation is far more rude than their initial "mistake," which I already informed them did not offend me. I'm a friendly person. I like people. I like to tell stories. I like connecting to things that are going on in other people's lives. But I don't like doing those things to make strangers feel better about their own discomfort with gender ambiguity. Still, these situations seem unavoidable. Sometimes they're funny, sometimes awkward, sometimes scary, and sometimes downright confusing for everybody involved.

Some notable moments from the archive of my own experiences:

About five years back, I was standing in the snack aisle at the grocery store when a woman passed by, eyeing me carefully. She finally exclaimed, "That's a little girl! That's a little girl!" With a slight drawl, she asked me, "Honey, how old are you?" Now, during this time in my life, I was in fact having some difficulty remembering how old I was. I was past 21 but nowhere near 30, and all those years in between just seemed all mushed together in my brain. I thought for a moment and then said, "Twenty-two - no - twenty-three... Uh, no, twenty-two..." The lady was now staring at me as though I were completely insane. I trailed off and looked up and she looked me in the eye for a long moment and then said, slowly, "You don't know. You can't remember." Then she turned and walked away.

The Awkward: "Is this your son?"

This happens to me ALL. THE. TIME. Most recently, it happened at a conference I was at for work. Between workshops, some colleagues and I were sitting around, getting ready to debrief the day. While one co-worker and I were sitting at a table chatting, someone who knew her came up to us and loudly asked, "Is this your son?" which then necessitated the familiarly awkward explanation. I would also like to point out the fact that I had just met this same lady the day before.

No less awkward was the woman in the hotel elevator at the same conference who asked me if I was Justin Bieber. I need a haircut STAT.

The Scary: "Son, you've got to learn to read better"

I love road trips. I love road trips that involve rest stops with family/unisex bathrooms even more. It may be stereotyping on my part, but I think that my heightened anxiety over gender-segregated public restrooms in places like rural Indiana is not without cause. On a road trip two summers ago, my partner and I stopped to use the bathroom somewhere in the rural Midwest. As I was walking towards the women's room, two burly-looking middle-aged guys standing outside the bathrooms started calling after me, "Hey, that's the women's bathroom." I ignored them and kept walking, assuming that once I walked into my selected bathroom and didn't come running right back out embarrassed, they'd realize they were mistaken and shut up about it. Wrong. I used the toilet, washed my hands and headed back outside and those guys were still standing there. As I was walking past them back to my car, they took a few steps towards me and said, "Son, you've got to learn to read better - that was the ladies' room." I could have just kept walking to the car, but I was really annoyed and despite my gay-bashdar rapidly escalating to high alert, I felt strangely bold. I turned around and said firmly, "I don't actually think it's any of your business which bathroom I use." To the dudes' credit, they were sorry - though not very gracefully - and we were on our way, but it's made me nervous about rest stop bathrooms ever since.

The Confusing: "Where's the rink!?"

This story isn't first-hand. It happened to a friend of mine, and it's pretty illustrative of what happens when people are so sure of what they're seeing and trying so hard to be helpful that they aren't actually listening to anything you're saying. I play on a women's ice hockey team and every winter we have the opportunity to play a fun game with a group of "mighty moms" at an outdoor rink nearby. The rink is a little hard to find and one of my teammates got lost on the way to our match last year. When she finally arrived at the right location, she couldn't find the rink itself, so she asked a lady in the parking lot for directions.

The lady told her, "Oh, the men's locker room is just over there," to which my friend responded, "Thanks, but where's the rink?"

The lady pointed and said, "Well, the men's locker room is right there."

My friend said "But where's the rink?"

The lady said, "You can see the men's locker room right there."