A few weeks ago, a friend of mine shared a blog post on Facebook from fellow queer blogger at Feminist Pigs, providing suggestions to help children engage in what that blogger calls "gender self-determination," a term I have become completely smitten with.  I am in fact utterly smitten with the entire post, titled "Children's Gender Self-Determination: A Practical Guide," which you can read here: http://feministpigs.blogspot.ca/2012/02/childrens-gender-self-determination.html.  I loved all five points listed in the "guide," but two in particular really resonated with me.

First, I loved the blogger's opening suggestion, "Don't refer to kids as boys and girls."  This is something I think about constantly since everything in life seems to be segregated by gender from bathrooms to department store clothing sections, and apparently now, Bic pens.  I worry for gender non-conforming kids, for my own not-yet-existent children, and for all children that so much of their childhoods revolve around not only gender-segregated activities, but gender-segregated language.  The author of the self-determination post advises people not to use terms of endearment like "buddy" or "princess" unless you use them in reference to any child.  What's scary about this suggestion is how hard it actually is.  I consider myself someone who has thought pretty long and hard about gender and sex - as social constructs, as medical constructs, as an obstacle in the way of my and others' participation in everyday citizenship, or as performance, and so on - and yet, I have to consciously and carefully stop myself from doing things, like using gender-segregated language, that I have been socialized to do.  For instance (I'm about to out myself as a crazy cat-lover, so if you didn't already know, I have two cats.  And I love them), our female cat is smaller, softer, and generally more cuddly (though I wouldn't say more affectionate) than our male cat who is larger, more active, and has coarser fur.  He likes attention, but does not like to be held.  Sometime after we got the second cat (the male), I noticed that I tended to use a softer voice, gentler touch, and different pet names (excuse the pun) for the female cat than for the male cat.  I called the female cat "sweetheart," "sweet pea," "bug" or "baby girl."  I called the male cat "buddy" or "baby boy," or by his regular name.  As I realized that I was doing this, I wondered if my use of tone and choice of words had any effect on the development of their personalities.  To get myself out of the habit of doing this with animals or people, I've tried to actively stop myself from using stereotypically gendered language around the cats - I make an effort to call the female cat "buddy" and to be gentler and sweeter with the male cat.  It is surprisingly hard.  It may not matter to cats, but I have to imagine these sorts of interactions have a profound impact on humans.  People use certain terms of endearment with female babies and others with males babies.  Others have made frequent mention of the fact that female babies are often told how "cute" and "pretty" they are, while male babies are told they are "husky," "handsome," or "smart."  (Case in point): 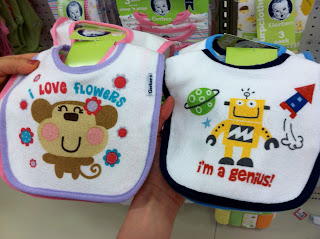 A few years later, when little boys start acting macho and tough and little girls declare their obsession with all things princess, we smile, sigh, wash our hands of any responsibility in shaping gender identity and say it must be in their "gender DNA" or something.  Which brings me to the second point I liked so much about the gender self-determination post.  The third suggestion is "Don't diagnose your kid," meaning that every time children step outside of socially-constructed gender boundaries doesn't mean that they are "gender non-conforming" or transgender.  It means that the socially-constructed "boundaries" are just that - constructed.  Children are merely showing us their willingness to explore a diversity of interests, if we're willing to accept that we might have been wrong about the connection between the physical features we use to determine sex and the personality features we attribute to gender.  And yet, sometimes young children do appear to subscribe to rather rigid forms of masculinity and femininity.  In that vein, the blogger also warns against automatically attributing a male child's obsession with guns, for instance, to testosterone.

Some of the literature on early childhood development insists that preschool-age children often have very rigid ideas about gender and become almost gender caricatures to the extent that they might develop obsessions with guns and/or princesses because, according to such research, children that age do not actually understand that sex and gender are fixed and cannot change.  The children worry it might change and thus, act in a way and police each other in a manner that reassures themselves that it will not.  But sex and gender do change.  We know this because there are gender-nonconforming people, trans people, intersex people, people who claim a third gender, people with a diversity of sizes and shapes of reproductive organs, people who like to wear dresses on some days and a suit and tie on others, and just people in general, most of whose lives do not reflect idealized masculinities and femininities.  Sex and gender are not fixed.  Perhaps preschoolers are more savvy than we realize and can see that sex and gender are quite fluid.  Given the fairly consistent rigidly gendered messages most children get from birth, though, it is easy to see why young children might fear gender fluidity - it is not, according to most of their most important adults or books or toys or movies or TV shows, something desirable.  Which is why I like the idea of gender self-determination all the more.  If kids can see that gender is fluid, why not allow them to embrace that?  What are we so desperately clinging to when we insist on defining people by gender, beginning at birth.  I think the answer is that it's the adults, and not the kids, who actually fear change.
Posted by Sumner McRae at 9:24 PM 1 comment: