When I first saw the story about the 13-year-old who challenged the makers of the Easy Bake Oven to offer the toy in colors other than pink and purple (and to feature boys as well as girls in their advertising and packaging) for the sake of her younger brother and other boys who wanted one, I was impressed by her initiative.  I was also confused, because while I didn't have an Easy Bake Oven as a child, I had friends who did and I have no particular memory of them being super pink or purple.  My experience with the ovens are limited so my memories are likely fuzzy, but I seem to remember the thing just being kind of metallic and plain, looking something like this: 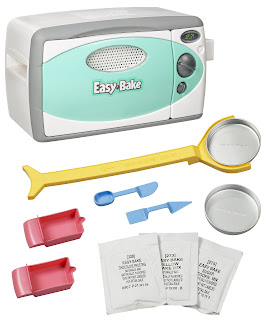 Apparently, my faded memory is not too far off, as Hasbro, the company that makes Easy Bake, acknowledges that they used to make what they called "gender neutral" options in the past, but after conducting market research which showed that most interest in the toys were from girls, they pinked and purpled it up.  (Read more here).  They now look more like this: 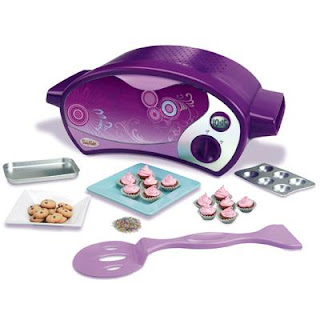 This all seems to have been roughly concurrent with the pink-and-purple sparkly princess craze that began its hold on America within the last ten or fifteen years.

The rest of my confusion stems from my lack of understanding of why Easy Bake ovens as they are currently aren't already "gender neutral."  Despite social anxiety about it, there's no prohibition against boys playing with pink and purple stuff.  Girls play with toys in colors besides pink and purple all the time, to no one's surprise.  Why is something that comes in colors that are considered appropriate for boys "gender neutral" while something that comes in colors considered appropriate for girls is not?  Just because something is pink or purple doesn't mean that it can't be for boys.  Nor does it mean that because something is supposedly more appealing to female children than to male children that it has to be pink or purple, as Hasbro has suggested.  I really appreciate the conversation the quest for the "gender neutral" Easy Bake oven has sparked because at its core is a challenge to the notion that only girls are interested in domestic-themed toys.  Still, I can't help but be frustrated by the reinforcement of the idea that pink and purple automatically means something can't be "gender neutral," or that all girls would want a pink or purple oven (thus the only reason to make blue or red or green or white ones would be because boys want them).  I know plenty of girls who probably would rather not have pink or purple if other options were available.  I also know a few boys who would be happy with hot pink.

At any rate, Hasbro announced its intention to unveil a "gender neutral" Easy Bake sometime in the new year.  I'll applaud this as an effort to provide more options and impose fewer limitations on kids, and will also encourage any boy who wants a pink oven, or any girl who wants a blue one, to have at it.  I also hope they take to heart the suggestion that they feature boys when promoting the toy - regardless of the color.