Here are five ridiculous things for no reason at all.  Some related to the holidays, some not.  All related to gender, of course.

5. The "Mancave"
This term seems to have become a buzzword that nobody (or at least all the straight guys on any episode of House Hunters ever) can stop saying.  Specs for a proper "Mancave" can vary, but generally include a large, preferably windowless, room in the basement; a gi-normous television; and a healthy assortment of pro sports team fan paraphernalia.  Admission limited to those with a penis.  Heterosexuality required. 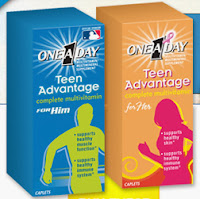 This phenomenon is nothing new, but the marketing associated with these things is so offensive, I experience shock anew each time I see them.  First, there's this well-known brand, advertising support for "healthy skin" for girls and "healthy muscle function" for boys:


And then there's "Power Teen," with packaging reminiscent of Monster energy drinks, and that appear to feature something called "Feminine Complex" in the girls' version (the boys' version comes with blue instead of pink-themed packaging and does not include "Masculine Complex," but rather "BlemishShield Complex."  Very complex indeed).

One thing's for sure - I feel like I'm getting a feminine complex just from looking at this shit.  Maybe it's a good thing we all just learned that vitamins are slowly destroying our livers.  Maybe next they'll offer us "his and hers" cirrhosis medication.

3. Those "He went to Jared" commercials:
All jewelry commercials are pretty bad, but these take the cake - and since the holidays are nigh, it feels like every other commercial is one of them.  If there's something on TV these days more reliant on traditional gender roles to sell a product, let's hear about it.  The thing about these commercials that I can't get over - besides the sickening heteronormativity - is that lately, they've been advertising the weirdest things, like rainbow-colored diamonds and charm bracelets for adult women, which the commercials seem to suggest should be worn to things like formal work events.  Who is actually wearing this stuff?  Does anyone even want these things?  I can't even. 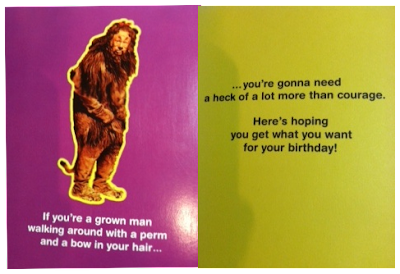 Not only is this card horribly transphobic, homophobic, and sexist, it also takes aim at the Wizard of Oz, which has so many delightfully queer elements, and is an all-time favorite movie of mine.  This card is utter sacrilege.  Don't worry, Lion.  You flaunt those curls.  I've got your back.

1. The "what your guy is really thinking" category of magazine articles and self-help books: 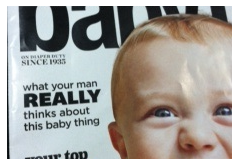 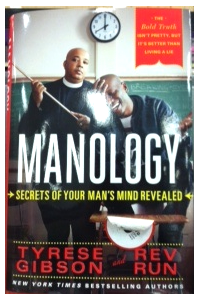 See above re: sexism, heterosexism, and related topics.  Found in everything from Cosmo to all parenting magazines ever, these articles can advise you on how "your guy" wants to have sex, how "your guy" is adjusting to parenthood, or what communication styles work best for (you guessed it) "your guy."  Because god forbid you could just ask him.  Or that he would just tell you.  But that, of course, would then prevent anyone from marketing "men's secrets" to women.  There must be some major conspiracy afoot in which monogamous heterosexual relationships are valued by the culture at large more highly than other kinds of relationships and the people in said heterosexual relationships are subject to immense social pressure to conform to traditional notions of masculinity and femininity, which include the supposed inability of male and female people to properly communicate with one another without the aid of advice literature meant to help women read men's minds and which they must pay good money to obtain.  Oh wait, there is such a conspiracy.  It's called capitalism.  See also: patriarchy.

There's a gender-tastic new book coming out, hopefully in the spring, called The Gender Book.  The project is the work of Mel Reiff Hill and Jay Mays along with, in their own words, "a whole big beautiful community."  This "whole big beautiful community" of folks have contributed both content and financial resources to the book, which is being funded via an Indiegogo campaign (you can join in the effort HERE).

How I did not know about this project until this week is beyond me - I must have spent this whole fall with my head under a rock - but I know about it now and I have to say that I am pretty stoked.  I have been waiting for something like this for a long time.

The aim of the project is to make gender theory and concepts like performativity accessible to everyone.  The book uses original artwork along with text to convey its message that gender and sex are complex, fluid, and culturally specific.  The authors explain in plain language - but without unnecessary over-simplification - how gender is constructed, how gender differs from physical sex, how gender socialization happens, how different people express gender identity, and so on.

The Gender Book will be important for lots of reasons, but I'm most excited because I often feel that the complexities of gender theory fall exclusively within the purview of academics.  I finished my master's degree in 2009 and since then have done relatively little academic reading and writing, but some months ago I pulled a feminist studies reader from the bookshelf and starting slogging through an article on gender identity and performativity.  Having not exercised my scholarly prose muscles for a while, I was a little rusty and found myself doing that thing where you read the same sentence over and over again without absorbing any meaning.  In the end, my brain warmed up and I was able to get through it and pull out the main arguments, but not without some effort.  I sat there wondering if I - a person ostensibly trained to decipher such texts - struggled with this, how on earth would we ever convey these ideas to the mainstream?  I was worried because this stuff is so important and yet almost everything written about it sounds like academics talking to each other and nobody else.  Academic work is important - it helps push the limits of our understanding of history, culture, power, and the assumptions we take for granted, but that work is enhanced when it is also accessible to everyone.  Projects like this invite everyone into the conversation.

The finished book will be available online for free in its electronic version, but if you want to get your hands on some hard copies, you can pre-order via the Indiegogo campaign (see link above).  The campaign runs until the end of December, so there are only a couple of weeks left to contribute.  The book is projected to be completed and ready to print by March 2014.  I'll be counting the days.

For more info (and more previews from the finished book!), visit: www.thegenderbook.com


Posted by Sumner McRae at 9:00 AM No comments:

The English language does not make things easy on genderqueer folks, or on anyone who prefers the gender neutral over the gender specific (as in "mailman" vs. "mail carrier" - they mean the same thing, but "mailman" rolls so easily off the tongue that despite thinking about this stuff constantly, even I have to take a second every time to remember to say "mail carrier" instead).  English pronouns are tricky.  The sir/ma'am binary makes addressing strangers feel like traversing a social etiquette minefield (at least any cashier/waiter/clothing store clerk who has ever encountered me seems to think so).

As a matter of fact, I got called "ma'am" and "miss" about seventeen million times the other day while buying a sandwich (Yes.  Seventeen million times.  By precise count of the official binary-O-meter, patent pending.). It threw me off a bit because that happens to me so rarely.  I've let my hair grow out a little bit in the front and I was all bundled up for winter, so I'll blame it on that.  Still, it got me thinking about how we could address strangers using words less gender-charged than "sir" or "ma'am" without resorting to the less-than-polite "Hey you," which most people tend not to appreciate.  Here's my food for thought:

1. "Friend" (In place of sir/ma'am).
You go to order a sandwich and instead of asking you, "What are you having today, ma'am?" the cashier would say "What are you having today, friend?"  This is also helpful for catching the attention of someone whose name you do not know, i.e., "Excuse me, friend!  You've dropped your wallet!"  Added bonus: In addition to being gender neutral, the use of "friend" allows you to avoid the more condescending/potentially offensive "sweetie" or "honey-pie," the awkwardly formal "sir," and the age crapshoot associated with deciding between "ma'am" and "miss."

2. "Good-lookin" (In place of he/him/she/her/they/them)
Unfortunately, I can't take credit for this one.  A good friend of mine came up with this brilliant idea as a means of talking about folks in the third person without using gendered pronouns (and getting to compliment everyone you're talking about to boot).  Example: "Joe is headed to the store.  Good-lookin is going to pick up a few groceries for us."  Plural use is also encouraged: "My relatives are coming in for a visit.  Good-lookin are the best houseguests ever."

3. "People" (In place of women/men)
I know this one seems obvious, but hear me out - this one is less about language itself and more about gendered language as a marketing ploy.  I cannot even explain to you how excited I would be to find myself at the pharmacy and suddenly see in place of all the bodywash "for women" and deodorant "for men" a display advertising "Soap!  For people!"  I mean, seriously, since when did male-bodied and female-bodied people start needing different soap?  When I was a kid, we had one bar of soap in the bathtub at a time.  Everybody used the same soap.  Everybody got clean.  This is apparently no longer the case for many people.  Now, I do understand that some people like soap that smells like coconuts and daisies.  Some people like soap that smells like industrial-strength laundry detergent.  Still others prefer a hint of fake mountain air.  Although soap-makers assume these preferences fall along gendered lines, none of this means we must have gender apartheid in the soap aisle.  I think soap companies should consider marketing their products in ways that would expand their target audiences.  For instance, a conventionally masculine guy who likes the delicate scent of lavender probably won't buy lavender bodywash "for women," but he might buy lavender bodywash "for people who enjoy lavender," thus expanding the potential consumer base for lavender soap.  I'll be waiting by the phone for that marketing consultant job offer from Suave anytime now.