When we were young, many of us were told by parents or other adults to learn to ignore hurtful words from others - that physical blows could cause us pain, but we could learn to withstand teasing and verbal harassment.  Sometimes that's true, but as bullying becomes a topic of national conversation and we begin to understand the impact of both bullying and social pressure on queer and gender non-conforming children, as well as kids from other historically marginalized groups, we're also coming to the realization that the old adage ending with "words can never hurt me" may be a falsehood.  Words can hurt.  They create and reify boundaries.  They give power to people who fill verbal space and produce knowledge and they create silences where marginalized people ought to have voice.

My partner and I are avid watchers of the show, Top Chef.  During the most recent season, the show aired a brief scene between a few of the final contestants making fun of one of their fellow (male) chefs for getting a manicure.  One of the other (male) chefs said, "Where I come from, men don't get manicures," after which everyone else laughed.  This comment was made jokingly, but it is a common and not ineffective means of policing gender.  I have not been able to get it out of my head.  The comment implies, of course, that a man who gets a manicure is not masculine enough - is perhaps not a "real" man.  He might be gay (with the implication being that gay men are not "real" men), or he might be trans (the implication here being that men who depart from normative masculinity might actually be women - offensive both to trans folks and to cis women, since the deeper implication is that to be a woman is to be less than a man).

I've written before about my feelings on the kind of gender policing that comes in the form of cheap jokes about queer and transgender folks.  (Check out here and here).  I hate when comedians do it, I hate when sitcoms do it, and I hate when regular people do it.  Jokes at the expense of transgender and queer folks (or any other marginalized group) are almost never actually funny, especially when they're told by someone not identified with that group.  They win cheap laughs by going for shock value or playing on people's inner nervousness about gender.  But these jokes also carry power.  They are a form of upholding the status quo - for instance, male privilege and female subordination - by implying that the idea that a male-bodied person might want to engage in "feminine" behavior is laughable.  And yet people say these things all the time - jokes about men getting manicures, or women with too much hair in the "wrong" place, or women who look like men, or men who want to wear makeup.  Sitcoms are probably the worst offenders, but I hear these kind of jokes from ordinary people on a daily basis.  Rarely are they challenged.  People do not see these kinds of comments as problematic or transphobic - or more likely, few people see transphobia as problematic.  Rather, they see it as a source of humor.  It's not.  It is hurtful and offensive and threatens to silence any gender non-conforming people within earshot.  It also reinforces the message to children who are immersed in this strict binary that straying outside the bounds of their designated gender or sex won't be tolerated.

It also means that stuff like this becomes fodder for news outlets: 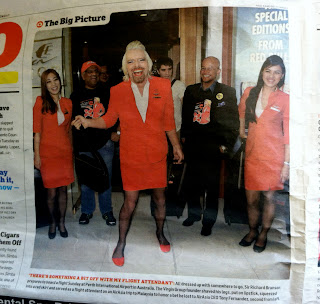 Men dressed up as women, or vice versa, is meant to come across as funny.  I'm not saying that people can't play with gender - I obviously think they should, but this strikes me as dehumanizing.  When we make mockery of trans and gender non-conforming people, we send the message to people that would do queer folks physical harm not only that the basis for their anger is legitimate but also that we likely won't intervene.  Maybe I'm naive, but I don't think most people actually feel this way.  I don't believe that most of those folks who believe homosexuality is a sin or who fail to understand the fluidity of gender actually intend bodily harm to queer people.  But some do, and our failure to consider the effect our words have on not just queer or marginalized folks, but on those who would do them harm, can have deep, and sometimes fatal, consequences.  There are ways to transform the way we talk to, and about, each other.  I challenge us all, the next time someone jokes that "men don't get manicures" or anything in that vein, to ask, "Why not?"