"I'm Not Racist, But": Colorblindness, Privilege, and Humor (or lack thereof)

"I'm not racist, but..."
If I had a dollar for every time I've heard someone start a story with that caveat and then go on to say something completely offensive and inappropriate, I'd be rich.  What gets under my skin most about this turn of phrase is that, at least in my experience, it is largely used by white folks while in the company of other white folks to give some example of their discomfort with people of color (or immigrants, or neighborhoods where the white population is very small or "in transition," or people for whom English is not a first language, and so on...) while still following the social rules of the colorblind era.  Even while following the "rules" of colorblindness, these kinds of stories convey a sense of uneasiness with colorblindness.  I can't help but feel when this happens that white folks are trying to create a space for themselves to say things that they know are a little (or a lot) inappropriate - things they wouldn't say if people of color were within earshot.  It makes me feel like white folks in exclusively white company believe themselves to be in a momentary White People Club and are testing whether those around them are also members.  It's white folks' code for "I want to say this really problematic thing that is questionably funny and almost certainly not OK, but you're white, too, so you won't mind that I say this."  But I do mind. 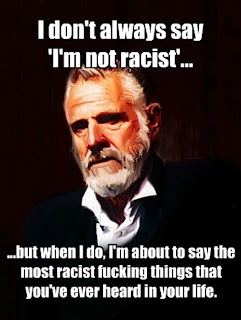 I am white.  As a result, despite the fact that I try on a regular basis to make clear that I am in fact not "colorblind," but actively anti-racist, white folks still try to tell me their "I'm not racist" stories so that I can be in the White People Club and, I can only imagine, assuage their fears that what they're saying might actually be racist.  But you know what I mean, I can almost hear them say.  I can't do it.  I don't want to be in the club.  It's easy for folks to say they're not racists when they define racism as outward expressions of prejudice, a la the KKK or Bill O'Reilly, but in truth we're all racists in that we were raised in a systematically racist society (see the following re: race and mass incarceration, segregation in the cafeteria, white privilege, race in the media, American perspectives on the "third world," and for good measure, I think it never hurts to re-read the Autobiography of Malcolm X.).

We may strive as individuals to combat inter-personal prejudice and we may find overtly hostile expressions of racism like violence, name-calling or legal segregation repugnant, but we are steeped in a culture of bias and marginalization.  Escaping that isn't impossible, but it will take more than hoping that having a black president has erased systemic discrimination, or folks like Paula Deen tearfully begging us all to understand that despite what she said in the past, she's not racist.  We struggle with this.  I think the recent internet "meme-fication" of African-Americans being interviewed on local news stations is a prime example (Think Antoine Dodson, Sweet Brown, or Charles Ramsey).  These things have a tendency to go viral in a way that suggests we've lost track of the line between humor and mockery.  A while back, Slate posted an article called "The Troubling Viral Trend of the 'Hilarious' Black Neighbor" exploring this notion, and it's been a topic of discussion on NPR, as well.  What's most troubling about some of these "memes" is that the gravity of the stories is forgotten.  Dodson and Ramsey were both doing good deeds under frightening circumstances - Dodson by helping his sister fend off a rapist who had broken into their home and Ramsey by helping three trapped women and a child escape imprisonment in his neighbor's house.  Brown, of course, was the victim of a house fire.  As children we're taught that a joke is funny when folks laugh with you and cruel when folks laugh at you.  I get the distinct feeling that neither Dodson, Ramsey, nor Brown are laughing.

This post doesn't have a neat and tidy feel-good ending.  There's no easy way to wrap this up with some kind of simple, here's-how-we-fix-this message.  The obvious things to do are, for white folks, to abandon the "I'm not racist" caveat.  White folks or other folks in positions of privilege can also challenge these stories when people tell them.  There are lots of ways to express discomfort - I try to accomplish this by either refraining from laughing at jokes that aren't funny even if others are laughing, or explaining why these kinds of stories and jokes make me upset, or simply getting up and walking away to indicate I'm not interested.  But I've also engaged in things I'm not proud of.  After the Antoine Dodson auto-tuned video came out, I certainly watched it more than a few times.  I laughed.  I showed it to others.  I've learned a lot since then.  I've done some self-reflection about why I thought that video was so funny.  I've stopped watching.  I've stopped singing the song.  I think we could probably benefit from more interrogation of things like this both inter-personally and on a national level.  We divide things into rigid categories - racist, or not racist.  As individuals, most people do their darndest to separate themselves from any notions of outward racism.  Because it's much harder to identify, we rarely consider our contributions, whether explicit or implicit, to systemic racism.  We're easily offended when anyone suggests we do participate in such a system.  This isn't helpful and we can do better.  So let's stop saying we're not racist.  Let's stop taking it personally when someone points out that the past and present marginalization of people of color in the U.S. and elsewhere globally has something to do with us.  Let's forget colorblindness and set ourselves on a path towards actual equality.  They say admitting you have a problem is half the battle.  I have a problem.  I benefit from a racist system.  If you're listening, I'd love to tell you a story about that.