Invisible Queer: The shift from getting "Sirred" to getting "Mom'd"

Ever since I cut my hair short - almost ten years ago, I have become accustomed to regularly being addressed as “sir” by the vast majority of strangers I encounter. It’s partly because of how I dress (and the fact that I do not, and have not ever, had boobs of any noticeable size), but mostly, I think it’s the hair. I don’t mind being “sirred” most of the time - as someone who claims a genderqueer identity, I don’t tend to enjoy being referred to as “lady” or “ma’am” - so given the choices, “sir” is not the worst thing. It’s awkward on occasion - usually more so for the folks with me, or for whoever’s doing the “sirring,” than it is for me. I don’t love awkwardness, but again, it’s not the worst thing. 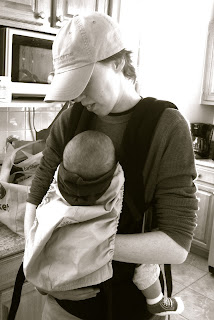 What I didn’t realize, is that not only is being sirred not the worst thing, I think part of me really likes it. I came to this realization during the near eleven months I recently spent as a stay-at-home parent, during which time I was not sirred a single time. As long as I was with the baby, everywhere I went, I was “mom’d.”

We are not planning for our baby to call me “mom” - we’ve been referring to me as “papa” (read more about that here). But it’s not the fact that folks are calling me “mom” when I don’t claim that title that throws me off - there’s no way people would know I prefer “papa” if I don’t say so and there’s no need to have that conversation with every grocery store clerk on the planet. Rather, I’m feeling thrown off by the dramatic shift in how I’m being read. I’ve gone from being predominantly read as masculine in public to being predominantly read as feminine. It’s jarring, in part because it has changed how people treat me, and in part because I completely didn’t expect it. Perhaps I’m naive to have been surprised, but since nothing about my appearance or expression changed - hair, clothes, mannerisms - save for having an infant strapped to my chest most of the time, I assumed people would still read me as masculine, as they always had.

Because I was frequently read as a very young man in the past (young enough that perhaps nobody would expect me to have a kid), the fact that I now frequently have a baby in tow leads to the immediate conclusion: Mom/woman. In the past people either confidently addressed me as sir, or hesitated and waffled back and forth between “ma’m” and “sir” as they tried to figure me out. What’s fascinating to me now is that there is absolutely no hesitation when I’m with the baby. I am “mom’d” without question every time. The truth is, people still don’t expect to see men or boys with children. I think it’s also possible that people don’t expect to see queer and genderqueer folks with children either. Perhaps people now see the baby in my arms, or the stroller, or the diaper bag over my shoulder, and don’t see anything else.

It’s been an uncomfortable shift, as I feel less comfortable with the title “mom” than with “sir,” though neither is really right. This shift in perception has also illuminated the limitations of the gender binary in ways I hadn’t considered before becoming a parent. Before, I was “sir.” Now, I am “mom.” As a queer-identified person, I am invisible either way.

This blog entry also appears at Queerdadsblog.com.
Posted by Sumner McRae at 4:27 PM